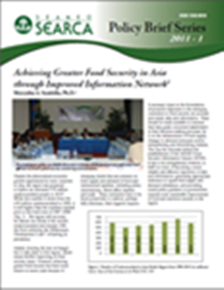 Despite the phenomenal economic growth experienced by most countries in Asia, the region was projected to harbor an estimated 578 million undernourished people in 20103. While this number is down from the 658 million undernourished in 2009, it is still higher than the numbers reached prior to the food crisis of 2007-2008 (Fig. 1). ! e region still accounts for almost two thirds of the world’s undernourished and remains 30% shy from achieving the Millennium Development Goal 1 of halving its prevalence.