Smallholder Commodity Systems in High-Value Crops: The Case of Calamansi and Jackfruit in the Philippines 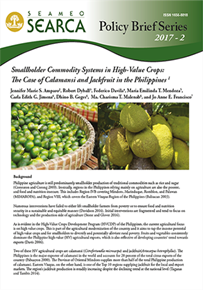 Philippine agriculture is still predominantly smallholder production of traditional commodities such as rice and sugar(Cororaton and Corong 2009). Ironically, regions in the Philippines relying mainly on agriculture are also the poorest, and food and nutrition insecure. This includes Region IVB covering Mindoro, Marinduque, Romblon, and Palawan (MIMAROPA), and Region VIII, which covers the Eastern Visayas Region of the Philippines (Balisacan 2003).

Numerous interventions have failed to either lift smallholder farmers from poverty or to ensure food and nutrition security in a sustainable and equitable manner (Davidson 2016). Initial interventions are fragmented and tend to focus on technology and the production side of agriculture (Stone and Glover 2016).

As is evident in the High-Value Crops Development Program (HVCDP) of the Philippines, the current agricultural focus is on high value crops. This is part of the agricultural modernization of the country and it aims to tap the income potential of high value crops and for smallholders to diversify and potentially alleviate rural poverty. Fruits and vegetables consistently dominate the Philippine high-value (HV) agricultural exports, which is also reflective of developing countries' trend towards exports (Davis 2006).

Two of these HV agricultural crops are calamansi (Citrofortunella microcarpa) and jackfruit (Artocarpus heterophyllus). The Philippines is the major exporter of calamansi in the world and accounts for 20 percent of the total citrus exports of the country (Pabuayon 2000). The Province of Oriental Mindoro supplies more than half of the total Philippine production of calamansi. Eastern Visayas, on the other hand, is one of the Top 10 regions supplying jackfruit for the local and export markets. The region's jackfruit production is steadily increasing despite the declining trend at the national level (Taganas and Tambis 2014).

This policy brief is based on a study supported by SEARCA under its Seed Fund for Research and Training (SFRT). The study employed secondary data review, key informant interviews, and focus group discussions in two case sites—Victoria, Oriental Mindoro and Inopacan, Leyte. This paper focuses on the (1) assessment of the HV crops commodity systems—its current challenges, vision, and proposed strategies; (2) smallholder farmers' and non-farmers' perceptions of the HV crop commodity systems; and (3) policy recommendations to improve smallholder farmers' engagement in the high-value crop commodity systems of the country.