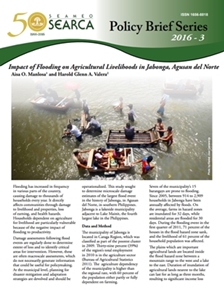 Flooding has increased in frequency in various parts of the country, causing damage to thousands of households every year. It directly affects communities through damage to livelihood and properties, loss of earning, and health hazards. Households dependent on agriculture for livelihood are particularly vulnerable because of the negative impact of flooding to productivity.

Damage assessments following flood events are regularly done to determine extent of loss and to identify critical areas for intervention. However, these are often macroscale assessments, which do not necessarily generate information that could be useful for policymaking. At the municipal level, planning for disaster mitigation and adaptation strategies are devolved and should be operationalized. This study sought to determine microscale damage estimates of the largest flood event in the history of Jabonga, in Agusan del Norte, in southern Philippines. Jabonga is a lakeside municipality adjacent to Lake Mainit, the fourth largest lake in the Philippines.