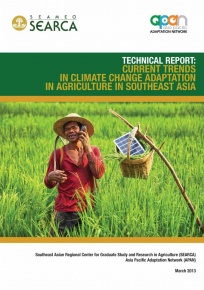 EPUB format in this language: English

Agriculture remains a major engine of growth in Southeast Asia, where it has the potential to reduce poverty and foster food security. To sustain and fully maximize the socioeconomic importance of agriculture in the region, the agenda of making it cliamte-smart is much warranted as environmental and climatic conditions have direct consequences on agricultural production. Better management of agricultural systems is urgently needed to mitigate the onset of rising frequency and intesity of weather extremes, which has led to various agricultural risks. Enhancing the Southeast Asian agriculture sector's resilience to cliamte change largely depends on the optimal and strategic combination of technical, socioeconomic, and financial mechanisms.

This report analyses the broad trends in climate change adaptation in agricultre in Sotheast Asia. it consolidates and synthesises current adaptation interventions and identifies critical intervention gaps. This report aims to provide a critical review of the overall landscape of available knowledge on climate change adaptation in agriculture in the region that could serve as basis for sound decision making. For a more unified analysis, this study follows the United Nations Framework Convention on Climate Change (UNFCCC 2011) adaptation process framework in itegrating and synthesizing adaptation efforts that have already been conducted in Southeast Asia.