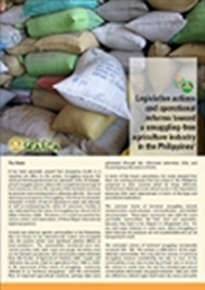 It has been generally argued that smuggling results in a negative net effect to the society. Smuggling reduces the revenue that the government can generate. Entry of cheaperpriced smuggled goods reduces the competitive advantage of local producers; hence, the capacity of the domestic economy to generate more employment is adversely affected. The more alarming consequence of smuggling is the threat to domestic industries in terms of risk of exposure to pests and diseases as well as endangering the safety of consumers. Further, it was estimated that the value of smuggling was about USD10 billion (Palatino 2008). Therefore, it is crucial to examine the nature, extent, and implications of these illegal international trade transactions.