The Approach towards Development of Effective Land Use and Management 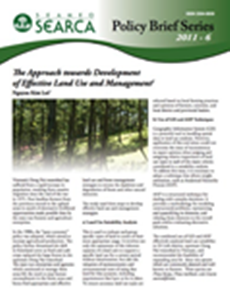 Vietnam’s Dong Nai watershed has suffered from a rapid increase in population, resulting from massive migration since the end of the war in 1975. Poor landless farmers from the provinces moved to the upland areas in search of alternative livelihood opportunities made possible then by the state-run forestry and agriculture enterprises.

In the 1980s, the “open economy” policy was adopted, which aimed to increase agricultural production. The policy further threatened the shift in forestland cover as food and cash crops replaced the large forests in the upstream Dong Nai watershed. The state-run enterprises and agencies which continued to manage these areas felt the need to stop human encroachment in the forest areas and hence find appropriate and effective land use and forest management strategies to reverse the depletion and degradation of forest and other natural resources.