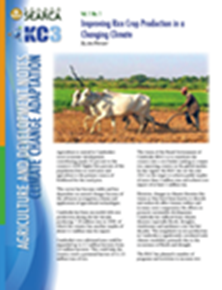 Agriculture is central to Cambodia’s socio-economic development, contributing nearly 33 percent to the country’s GDP. Eighty-five percent of the population lives in rural areas and agriculture is the primary source of livelihood for the rural poor.

This sector has become stable and less dependent on natural changes because of the advances in irrigation scheme and application of agricultural technologies.

The vision of the Royal Government of Cambodia (RGC) is to transform the country into a rice basket making it a major rice exporting country in the global market. In this regard, the RGC has set the year 2015 as the target to achieve paddy surplus of more than 4 million tons and achieve rice export of at least 1 million ton.

However, changes in climate threaten this vision as they have been known to directly and indirectly affect human welfare and in many cases compromise the efforts to promote sustainable development. Cambodia has suffered from climate disasters especially floods, droughts, windstorms and epidemics over the last decades. The irregularity in rice production in Cambodia is significantly correlated with climate variability, primarily due to the occurrence of floods and drought.

The RGC has planned a number of programs and activities to increase rice production to make Cambodia one of the major rice exporting countries in the near future. To address the climate change problem, Cambodia needs to increase its adaptive capacity to climate change and develop more climate resiliency programs.