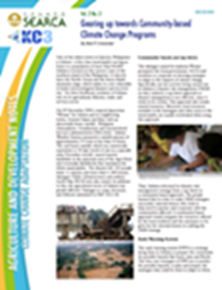 One of the oldest towns in Quezon, Philippines is Infanta—a first class municipality3 serving as home to a population of more than 60,000.  Infanta is located on the eastern coast of the northern island of the Philippines. It directly faces the Pacific Ocean and the Sierra Madre mountain range, which makes it a site vulnerable to hydro-meteorological disasters and sea level rise.  For their livelihood, residents of Infanta rely on its agricultural, fisheries, trade, and services sector.

On 29 November 2004, tropical depression “Winnie” hit Infanta and its neighboring towns, General Nakar and Real, with an abnormally heavy rainfall.  Philippine Atmospheric, Geophysical, and Astronomical Services Administration (PAGASA) - Infanta Weather Station measured a rainfall amount of approximately 372 mm in less than 24 hours.  The said heavy rainfall, which was statistically equivalent to 18 days worth of rain in a typically rainy November month, caused massive landslides in the upstream area of the Agos River and eventually, flashfloods that inundated the whole municipality.  The disaster left 165 people dead, 11 injured, and more than 4, 000 houses damaged. Public infrastructures and utilities worth PHP 300 M were also ruined. In addition to this, the agricultural sector of Infanta was greatly affected. Damages to crops, livestock, and fisheries amounted to PHP 103.3 M.