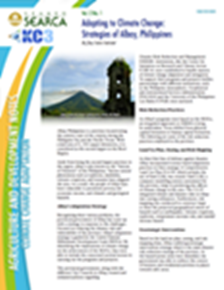 Albay, Philippines is a province located along the eastern coast of the country, facing the Philippine Sea and the Pacific Ocean. With a land area of 2, 552 square kilometres, it is considered the second largest in the Bicol Region.

Aside from being the second largest province in the region, Albay is also known as the “Vatican of Disasters” of the Philippines. Various natural phenomena such as typhoons, landslides, volcanic eruptions, and tsunamis have plagued the area. As a result, the people of Albay have been vulnerable to persistent poverty, low economic income, and climatic and geological hazards.