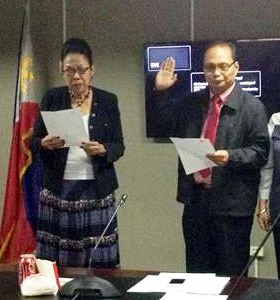 Dr. Rolando A. Delorino (MS Environmental Studies, UPLB 1986-1988) was appointed by the Philippines Commission on Higher Education (CHED) as the 6th President of the University of Eastern Philippines (UEP). Dr. Patricia B. Licuanan, CHED Chair, administered the oath in August 2015, after the Governing Board members of UEP voted unanimously in favor of Dr. Delorino. Within his term as President, Dr. Delorino aims to “enhance the relevance of UEP’s academic, research and extension programs in the light of national development thrusts and international standards; strengthen the University’s resource generation capacity in order to provide sustained support for the viable implementation of new and existing academic, research and extension programs, systems, procedures, and resources, in keeping with national thrusts on moral ascendancy; and broaden access to the University’s quality programs and services by the students, especially the poor but academically deserving, and the community.”

Prior to his appointment as UEP’s chief executive officer, Dr. Delorino was the university’s Vice President for Research and Extension. After completing his MS, Environmental Studies under the SEARCA scholarship in 1988, he took the PhD in Education (major in Education Management) at UEP.