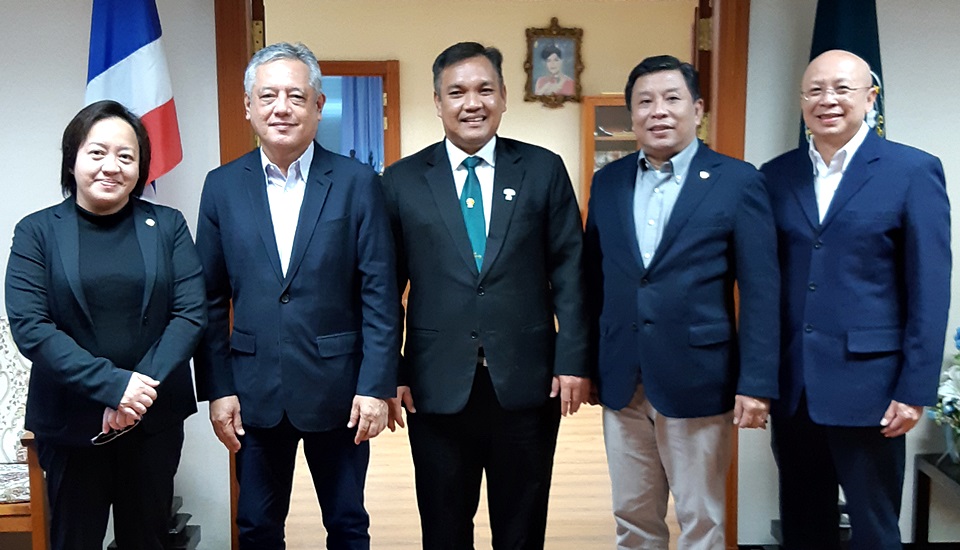 The officials present at the meeting were Dr. Chongrak Wachrinrat, KU Acting President, and Dr. Buncha Chinnasri, Assistant to the KU President. They were joined by University of the Philippines Los Baños (UPLB) Chancellor Fernando C. Sanchez, Jr., who is also concurrent Chair of the SEARCA Governing Board, and Ms. Adoracion T. Robles, Officer-in-Charge of the SEARCA Office of the Deputy Director Administration.

According to Dr. Saguiguit, the KU President expressed great interest in the proposed program and suggested that the full detailed program design be formulated as soon as possible. Dr. Chongrak also supported Dr. Saguiguit's idea of forming a task force composed of representatives from SEARCA, KU, and UPLB for this purpose.

The Thai model of Sufficiency Economy aims to transform the mindset of a whole population while enriching the lives of all the people in a sustainable way. It is promoted by the Thai government and applied by more than 20,000 villages in the country.

Meanwhile, SEARCA has been promoting the ISARD model that puts into action lessons, concepts, good agricultural practices, and technologies drawn from SEARCA's more than 50-year experience in ARD in the region. Currently, there are two sites in the Philippines where the ISARD model is being piloted.

Dr. Saguiguit explained that the new collaboration, meant to promote ARD in selected Southeast Asian countries, "will combine expertise and resources of SEARCA, KU, and UPLB to bear on the plight of resource poor farmers as they try to eke out a living from their limited land which oftentimes are affected by drought, flooding, and climate change. Other problems include lack of knowledge and access to efficient technologies and best farming practices, access to markets, support infrastructure, and farm inputs, among others. These are especially pronounced in Cambodia, Lao PDR, Myanmar, Vietnam (CLMV), and Timor-Leste."

The joint program aims to promote SEP and upscale aligned models of ISARD in other Southeast Asian countries through an awareness program, capacity building and knowledge sharing, networking and social learning, and action research. Initially, the target countries are CLMV plus Timor-Leste.

At the same time, the new regional ARD program is envisaged to internationalize the linkages and influence of KU, SEARCA, and UPLB in Southeast Asia. (Leah Lyn D. Domingo)