Phnom Penh, Cambodia- His Excellency Veng Sakhon, Minister of Agriculture, Forestry and Fisheries (MAFF) of Cambodia, hosted the MAFF-SEARCA-NU-RUA Joint Seminar that featured two graduates of the Nagoya University (NU) Satellite Campus in Cambodia. The graduates are MAFF employees and are the first awardees of the NU-SEARCA Joint Scholarship project. The seminar was also attended by officials from MAFF, the Royal University of Agriculture, NU, the Embassy of Japan in Cambodia, and JICA-Cambodia office. SEARCA was represented in the Seminar by Dr. Maria Cristeta Cuaresma, Program Head for Graduate Education and Institutional Development.

In his Welcome Remarks, Dr. Ngo Bunthan, Rector of RUA, thanked SEARCA for its "significant contribution in capacitating RUA staff through the granting of scholarships and conduct of trainings and short courses." Prof. Fumio Isoda, Director of NU Asian Satellite Campuses Institute (ASCI), also acknowledged the support of SEARCA to its students under the satellite campus in Cambodia and the Philippines.

In response, Dr. Cuaresma reiterated that, "SEARCA's mandate is to build the capacities of the 11 Southeast Asian countries toward agricultural and rural development." She affirmed that "SEARCA is pleased to collaborate with NU in a joint scholarship project for mid- and senior-level executives of MAFF to obtain doctoral degrees and is happy that its first two scholars have already graduated." She added that SEARCA remains committed to provide Institutional Development Assistance to RUA. 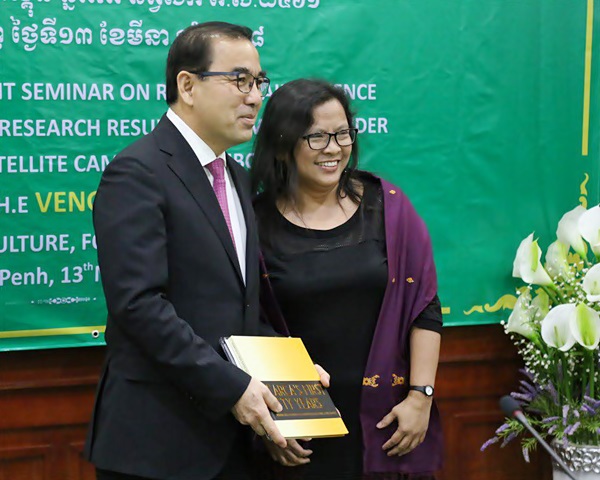 Dr. Cuaresma presented to HE Veng Sakhon copies of the coffeetable book highlighting SEARCA's work in its first 50 years, and the Golden Harvest, another coffeetable book featuring the outstanding SEARCA scholars honored in its 50th year celebration, including Dr. Seng Mom, RUA Vice Rector. The Minister expressed his appreciation of SEARCA's work in Cambodia and the region. Representatives from JICA and the Japan Embassy also expressed continuing support of the Japanese government for Cambodia.

The two NU-SEARCA joint scholars who recently obtained their PhD degrees and presented their studies in the seminar are Dr. Ngin Chhay with his study Sustainable Integrated Pest Management for Rice, and Dr. Bun Chan who discussed Heat Tolerance and Productivity of Dairy Cattle under the Tropical Climate in Cambodia.