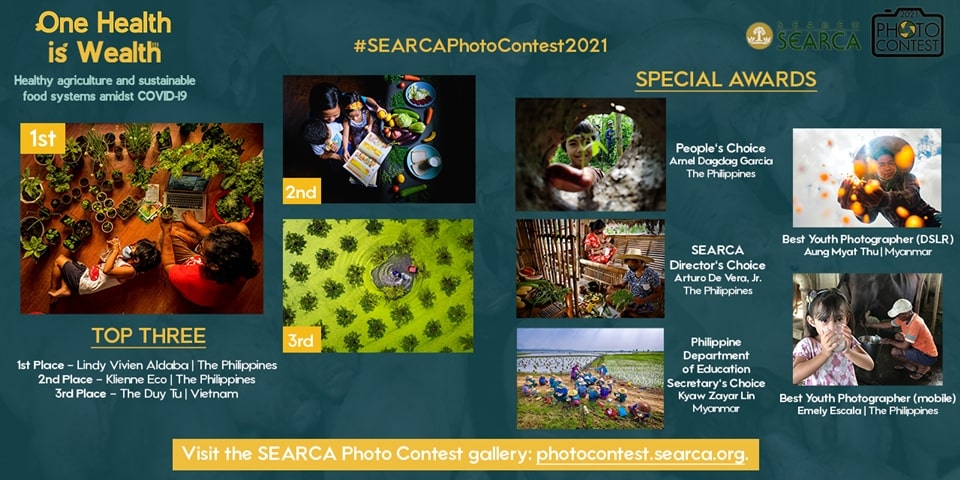 Images of farming families practicing healthy diets and engaging in nutritious food production during the persisting COVID-19 pandemic won in the 2021 photo contest of the Southeast Asian Regional Center for Graduate Study and Research in Agriculture (SEARCA) themed “One Health is Wealth: Healthy Agriculture and Sustainable Food Systems.”

Photographers from Myanmar, the Philippines, and Vietnam bagged the top three prizes and special awards in the 2021 edition of the annual competition.

A photo depicting home gardening by Lindy Vivien Aldaba won the first prize. The winning picture is a vignette illustrating how the COVID-19 pandemic opened people’s minds to produce food in the comfort of their own homes with access to online resources to help them grow their plants well.

Klienne Eco bagged the second prize with his photo of a mother and her children going through a schoolbook together in front of a healthy spread of vegetables, fruits, milk, and bread.

The third prize went to a photo of a farmer harvesting water mimosa by The Duy Tu. Water mimosa is a calcium- and iron-rich vegetable that also contains vitamins A and C. In Southeast Asia, it is found in still waters in Cambodia, Lao PDR, Thailand, and Vietnam.

The winner of the SEARCA Director’s Choice is a photo by Arturo B. de Vera, Jr. showing a farming couple with the father preparing a fresh harvest of fruits and vegetables for a meal and the mother breastfeeding her baby, both of which will boost the immune system against rampant diseases, including COVID-19.

“The food systems that focus on sustainable agriculture and recognize breastfeeding as the first food cut across human health and planetary health,” said Dr. Glenn B. Gregorio, SEARCA Director.

He added that the photo vividly captured the brightness of the sun that highlights the colorful harvest of the day.

The People’s Choice Award winner is a photo by Arnel Dagdag Garcia of a young boy about to plant a seedling as his father and brother harvest crops behind him. The photo garnered more than 1,000 likes on Facebook.

The first, second, and third prize winners won US$1,000, $800, and $500, respectively. The SEARCA Director’s Choice and Philippine Department of Education Secretary’s Choice winners each won $500, while the winner of the People’s Choice Award via Facebook votation gets $400. The Best Youth Photographer Award recipients each won $300.

The winning photos and the rest of the finalists may be viewed at https://photocontest.searca.org