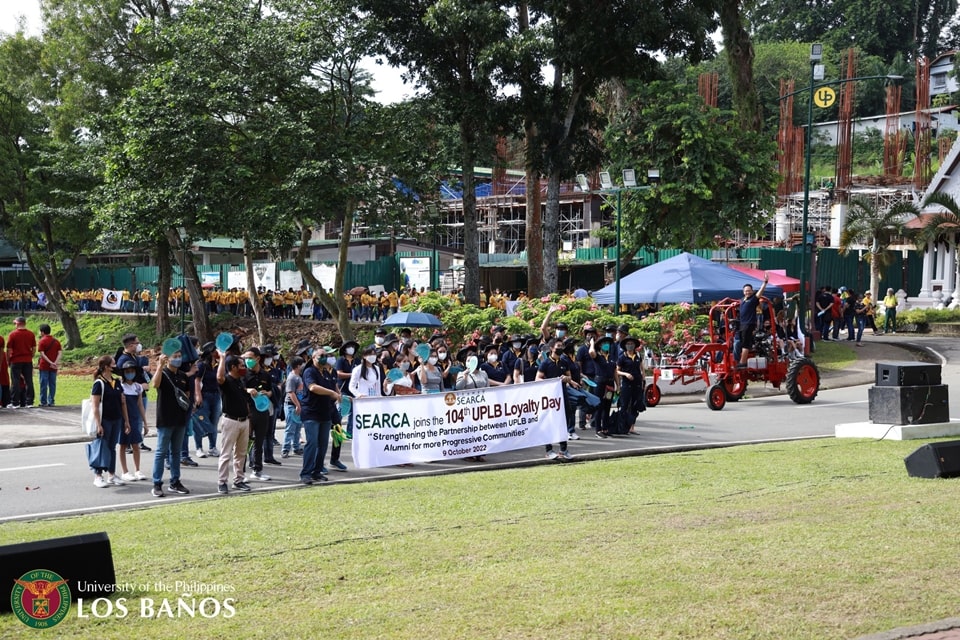 The Southeast Asian Regional Center for Graduate Study and Research in Agriculture (SEARCA) joined the University of the Philippines Los Baños (UPLB) in the 104th UPLB Loyalty Day celebration on 4-16 October 2022.

With the theme “Strengthening the Partnership between UPLB and Alumni for more Progressive Communities”, SEARCA staff participated in a festive celebration of the event way back in 1918 when members of the UPLB community volunteered to serve in the Philippine National Guard and fight in the historic World War 1.

As of today, UPLB and members of the Los Baños Science Community where SEARCA is a member of, allot one day of every year to celebrate this spirit of volunteerism and community engagement. 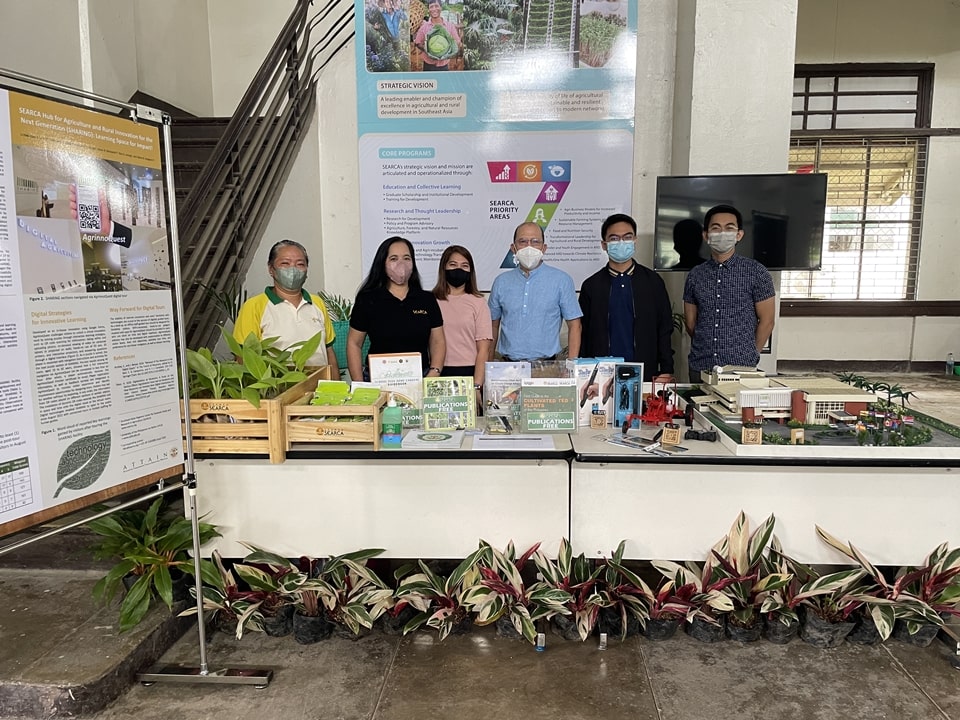 Dr. Glenn B. Gregorio (third from right), SEARCA Director, with SEARCA staff and personnel who man the SEARCA booth in the Alumni Trade Fair and Exhibit.

On 6-9 October 2022, SEARCA as an institutional partner to the UPLB Alumni Association, Inc. (UPLBAA) for the conduct of the TECHKnow Seminars on Entrepreneurship, set up a booth that features institutional videos on SEARCA’s work in the Philippines and in the Southeast Asian region with free publications and free seedlings up for grab.

The booth also contained a diorama on SEARCA Hub for Agriculture and Rural Innovation for the Next Generation (SHARING), the latest innovation facility of the Center promoting agricultural innovations and products in the region, and the Center’s 11th Five-Year Plan mounted on a cintraboard. 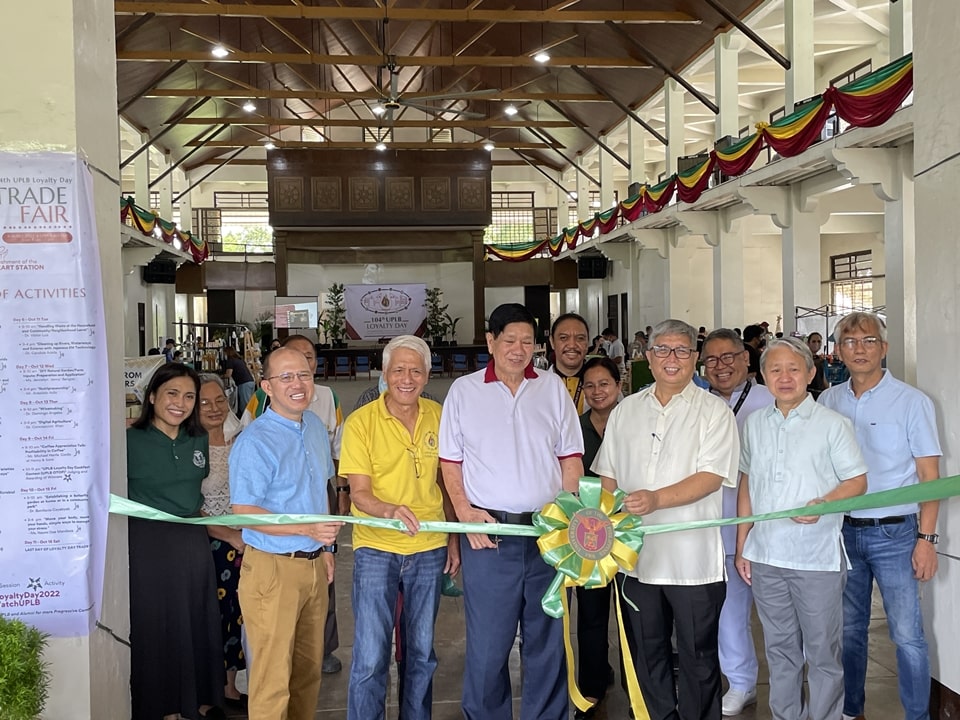 With a theme “Run for your Heart”, selected SEARCA staff participated in the said fun run on 8 October 2022 to raise awareness and promote healthiness and happiness by bringing neighboring communities close at the heart of UPLB.

The SEARCA staff pause to greet and to have a photo opportunity with Dr. Fernando A. Bernardo, former SEARCA Director (1984-1987) on their way to the steep road ahead of the 3K route. 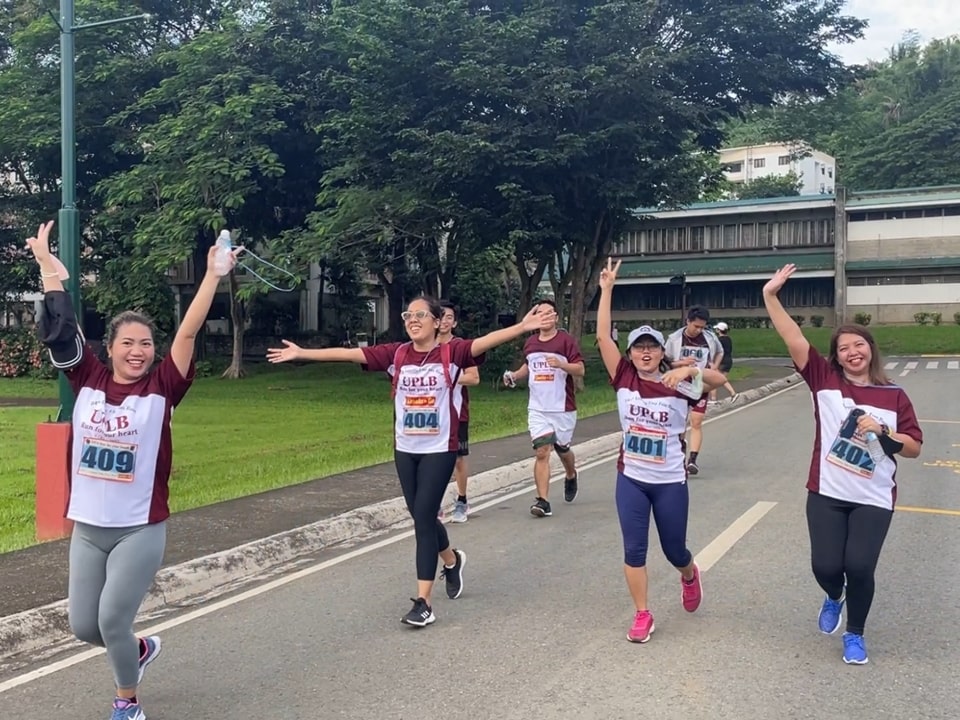 SEARCAns cheer as they finish the race.

This major event is a fundraising campaign of the UPLB Class 1972 to equip the Heart Station at the University Health Service with a 2D echo and an ECG machine. 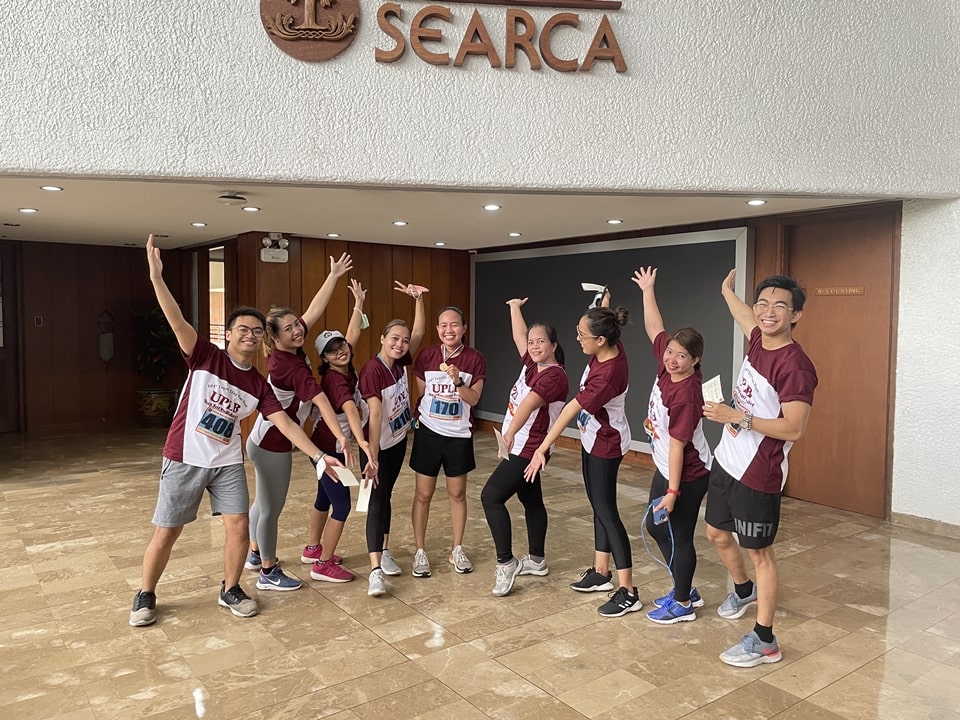 As a nod to increase SEARCA staff engagement, the Center covered the registration fees of the first 10 staff who pre-registered in the fun run. Ms. Donna Bae N. Malayang, Program Associate, Research and Thought Leadership, emerged victorious as the only SEARCA delegate who won a medal for being part of the first batch to reach the finish line. 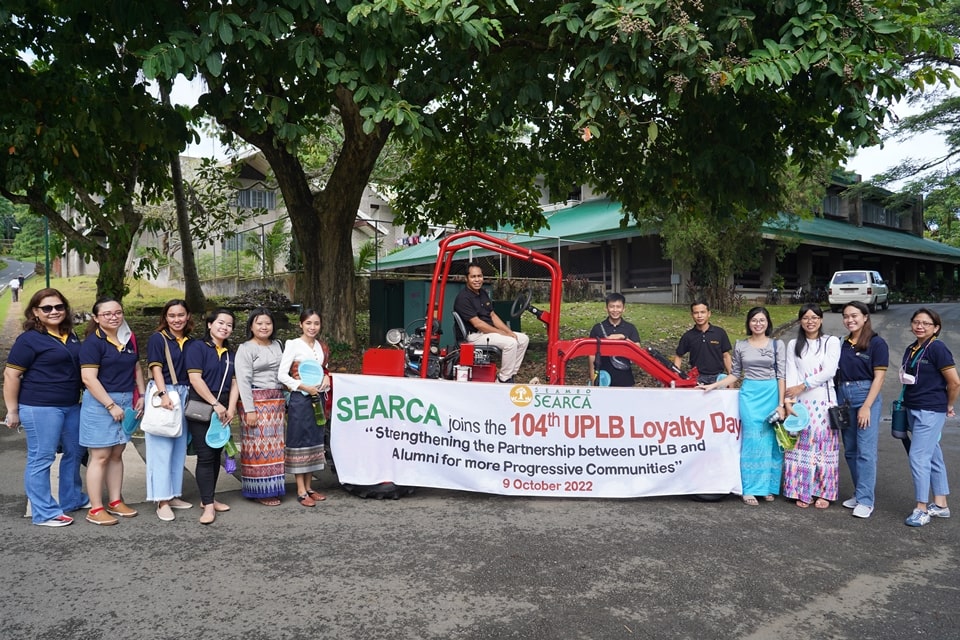 SEARCA scholars together with the SEARCA Education and Collective Learning Department. 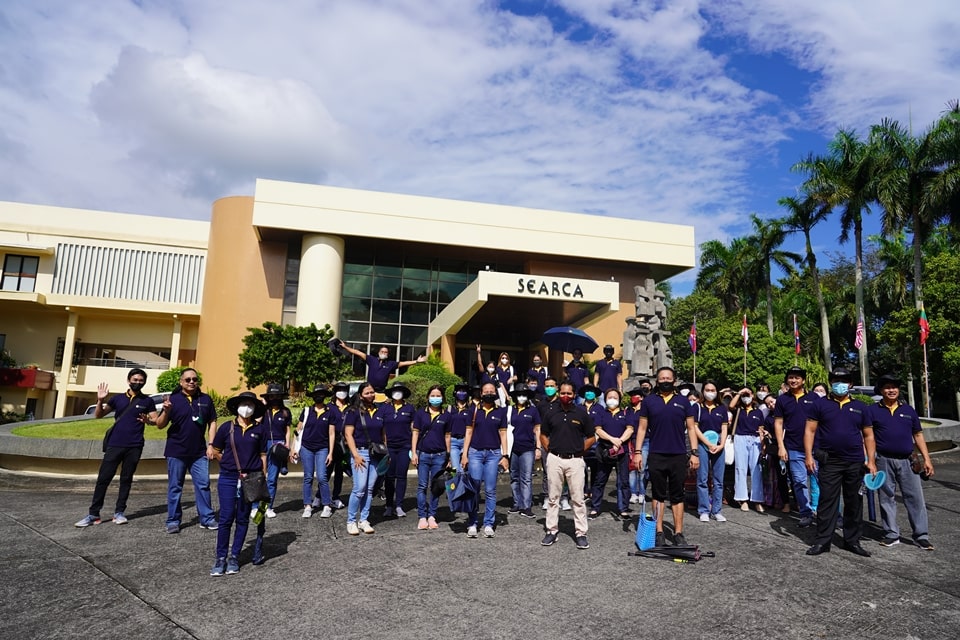 SEARCA staff pose for a picture after the traditional loyalty day paraded getting ready for the SEARKainan Open House.

The Loyalty Day parade is an annual event joined by SEARCA to pay homage to UPLB as its home institution since its inception in 1966. This year, the parade started from the Thai Pavillion, Women’s and Men’s Dorm, all the way to the Carillion.

More than 50 SEARCA staff together with SEARCA scholars in their national costume whose study posts are in UPLB graced in the event. The Center also paraded its prototype Ronnie Baugh / Oggun Tractor, which it is developing to support farm mechanization via sustainable and regenerative agriculture. 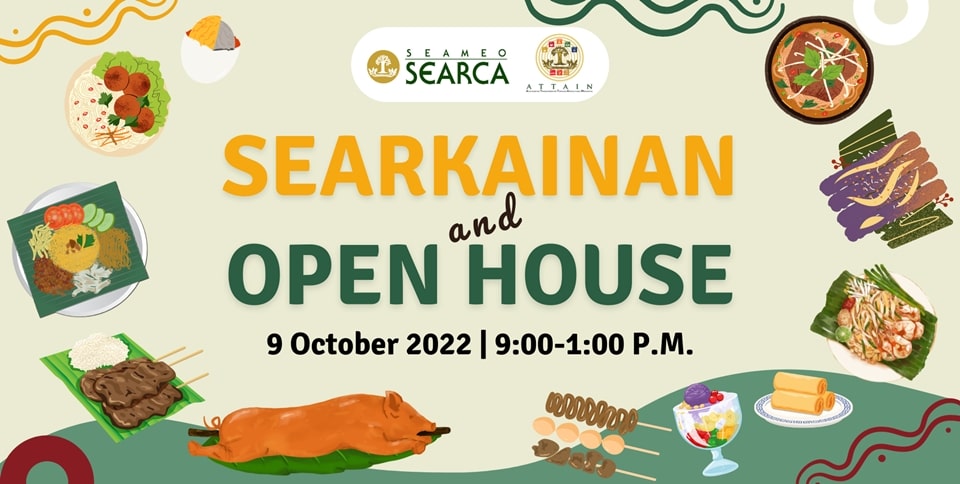 Afterwards, the UPLB community were welcomed in the SEARKainan Open House, where the Center opened its doors to the public and featured emerging innovations, pictures from the annual photo contest, and a mini food bazaar comprised of different Southeast Asian flavors.

Guests composed of primarily UPLB students, faculty and researchers, extensionists and professional staff (REPS) were greeted by SEARCA staff and had a tour around the SHARING AgriMuseum and Café, and the Center’s Sky Garden.

Dr. Gregorio joins in the casting of stones at the pedestal of the Oblation which were collected from the Molawin Creek.

After the parade, Dr. Gregorio with UP officials led by UP President Dr. Danilo L. Concepcion and representatives of various sectors, came together for the formal launching of the “Magkausong Para sa Oblation” fundraising project held at the UPLB Oblation Park. Lumabay-Labay Club ’57, a socio-civic student organization at UPLB, committed funding for the Oblation Park that houses the Oblation statue, an iconic symbol of UP depicting “a man facing upward with arms outstretched, symbolizing selfless offering of oneself to his country.” Dr. Gregorio joined in the casting of stones at the pedestal of the Oblation which were collected along the bank of Molawin Creek.