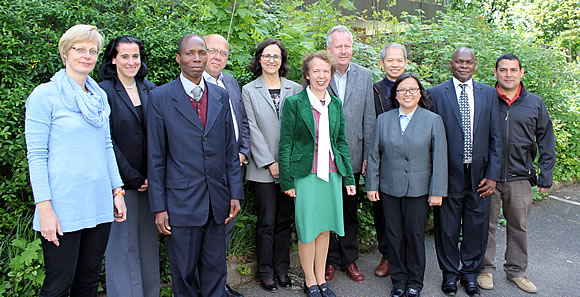 STUTTGART, Germany  - SEARCA affirmed its continuous support to the implementation of the Food Security Center (FSC) of the University of Hohenheim,(UHOH) by joining FSC’s management team and other strategic partners in its annual planning meeting on 5-6 May 2014. The annual planning event was held at the FSC headquarters, which is now under the leadership of Professor Hans Konrad Biesalski who replaced Dr. Manfred Zeller as its new Director, on 1 May 2014. Joining the planning workshop was Dr. Maria Cristeta Cuaresma, Program Head for SEARCA’s Graduate Scholarship.

During the meeting, Dr. Cuaresma presented the FSC-related accomplishments of SEARCA, which include among others, the successful implementation of the 4-week summer school in November 2013, in Los Baños, Philippines, which was joined by 13 participants from Asia, Africa and Latin America (see related news).

SEARCA has been a strategic partner of FSC since 2009, when the center of excellence supported by the German Academic Exchange Service (DAAD) with funds from the Federal Ministry of Economic Cooperation and Development (BMZ) of Germany was launched. Since then, SEARCA and FSC have successfully implemented non-degree trainings and international learning events on various food-security related topics.