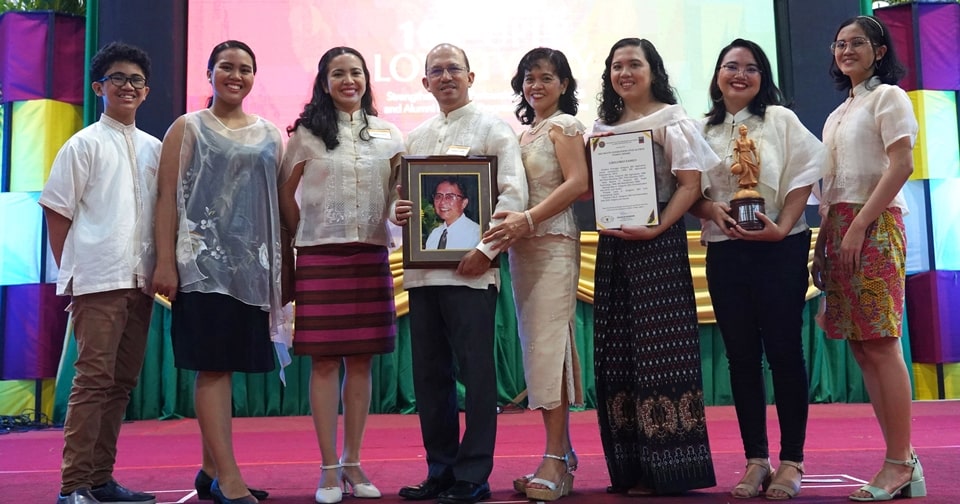 The family of Dr. Glenn B. Gregorio, Director of the Southeast Asian Regional Center for Graduate Study and Research in Agriculture (SEARCA), received the Multi-Generation University of the Philippines Los Baños (UPLB) Alumni Award during the 104th Loyalty Day and Alumni Homecoming: Strengthening the Partnership between UPLB and Alumni for Progressive Communities.

The family of Dr. Glenn B. Gregorio, Director of the Southeast Asian Regional Center for Graduate Study and Research in Agriculture (SEARCA), is one of the recipients of the Multi-Generation University of the Philippines Los Baños (UPLB) Alumni Award conferred by the UPLB Alumni Association (UPLBAA).

The special recognition is bestowed on families who have produced three or more successive generations of exemplary UPLB alumni in their own respective fields.

Dr. Rizalino P. Gregorio worked at UPLB from 1954 to 1962, starting as Student Assistant and was hired as Research Assistant and Assistant Instructor after graduation. He then transferred to Central Mindanao University (CMU) as Instructor and rose up to Professor 6 at the College of Engineering where he also became the Dean in 1978 after completing his PhD degree in Agricultural Engineering at Purdue University. He became the CMU Vice President in 1985-86 and Vice President for Administration and Officer-in-Charge President in 1987-1988 before his retirement after serving the government for 48 years.

Dr. Glenn B. Gregorio is a Professor at the UPLB College of Agriculture and Food Science and Academician at the National Academy of Science and Technology (NAST), Philippines. He is also the current Chairman of the Philippine Commission on Higher Education (CHED) Technical Panel for Agriculture and Steering Committee Member of the Philippine Department of Agriculture (DA)-Biotechnology Program. In 2021, he was named one of the United Nations Food Systems Champions and Filipino Faces of Biotechnology. A respected scientist who has published more than 120 scientific journals, book chapters, policy papers, and manuals, Dr. Gregorio also has a highly decorated career. Among his numerous awards are Ten Outstanding Youth Scientists of the Philippines (TOYS), Outstanding Young Scientist (OYS) in the field of Genetics, Honorary Foreign Scientist of the Rural Development Administration of Korea, The Outstanding Young Men (TOYM) Philippines, Ho Chi Minh Medal award for “Having Great Contribution to the cause of Agriculture and Rural Development of Vietnam.”  Dr. Gregorio is also an agri-entrepreneur, farmer, and a co-founder of Binhi, Inc., an agri-research start-up company on micropropagation and seed business.

Sharing the second generation spot with Dr. Gregorio is his wife Myla Beatriz Audije who worked at the UPLB National Institute of Biotechnology and applied Microbiology before becoming a stay-at-home mom in 1997, homeschooling their six children. She is now pursuing her PhD in Human Nutrition at UPLB to augment her role as a breastfeeding advocate.

The award was presented on 8 October 2022 during the 104th Loyalty Day and Alumni Homecoming: Strengthening the Partnership between UPLB and Alumni for Progressive Communities.