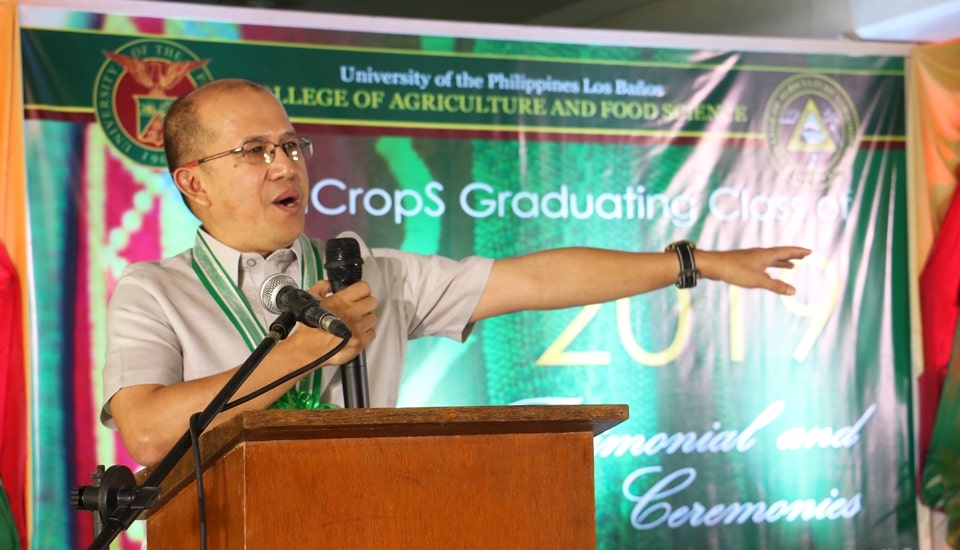 LOS BAÑOS, Laguna – Dr. Glenn B. Gregorio, Director of the Southeast Asian Regional Center for Graduate Study and Research in Agriculture (SEARCA), exhorted the University of the Philippines Los Baños Institute of Crop Science (UPLB ICropS) graduating class of 2019 to step up and step out as they move forward after graduation. Occasion was the UPLB ICropS Class of 2019 Testimonial and Recognition Ceremonies held on 20 June 2019 at its premises.

Dr. Gregorio said UPLB has equipped them to make a difference in their chosen field. But he was quick to point out that stepping up and stepping out does not mean the graduates must pursue their career in another country.

He prodded them to think globally but act locally.

A National Academy of Science and Technology (NAST) Academician, Dr. Gregorio told them of how he stepped out from his hometown in Bukidnon to study at UPLB, and how obtaining his BS, MS and PhD degrees from the same university did not box him in as his career took him all over the Philippines and around the world.

Dr. Gregorio urged the graduates to be at the forefront of development and how they can contribute to the global community even as they work and make a difference in their local capacity.

He said Ms. Yin Myat Myat Min of Myanmar, who completed her MS in Plant Breeding at UPLB ICropS, joins some 1,400 PhD and master's graduates who were SEARCA scholars. He shared that many of these SEARCA alumni have gone on to hold leadership positions in government, academe, the private sector, and international institutions. And so can the new graduates of ICropS.

"Be the heroes we never were and live," Dr. Gregorio emboldened the graduates, echoing the words of his predecessor, SEARCA founding director Dioscoro L. Umali.