MATAAS NA KAHOY, Batangas – Fifty-two SEARCA Scholars based in UP Los Baños attended the team building activity on 8 September 2019 at Shercon Resort and Ecology Park. This activity is regularly conducted by SEARCA through the Graduate Education and Institutional Development Department (GEIDD) to welcome new and continuing scholars and enable them to socialize with the rest of their peers at the start of the semester. Four teams, namely, Love Team, Yellow Sun, Green Champs, and Blue Sky competed in eight activities.

The first activity Meron o Wala tested their communication skills. The mechanics of the game required each team to stand once their assigned value was called. Love Team's assigned value was singko, Blue Sky was dies, Green Champs was kinse, and Yellow Sun was bente. Despite the speed of calling each different value and the different languages used to confuse the participants, Green Champs emerged as the winner. 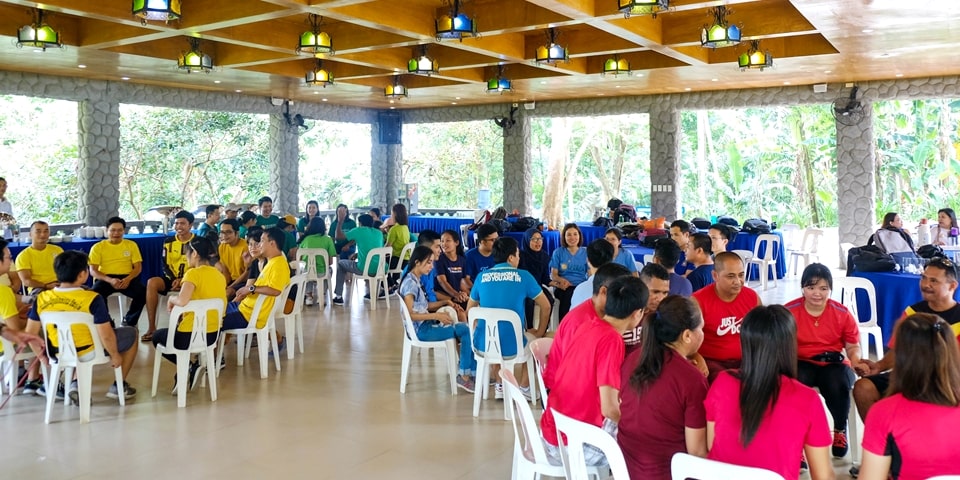 The second activity required the scholars to navigate a maze, which tested their trust among their members as they need to enter and exit it as a team. Despite the simplicity of the task, it proved to be a challenge as most of the teams met dead ends. Love Team was the first group to exit the maze. 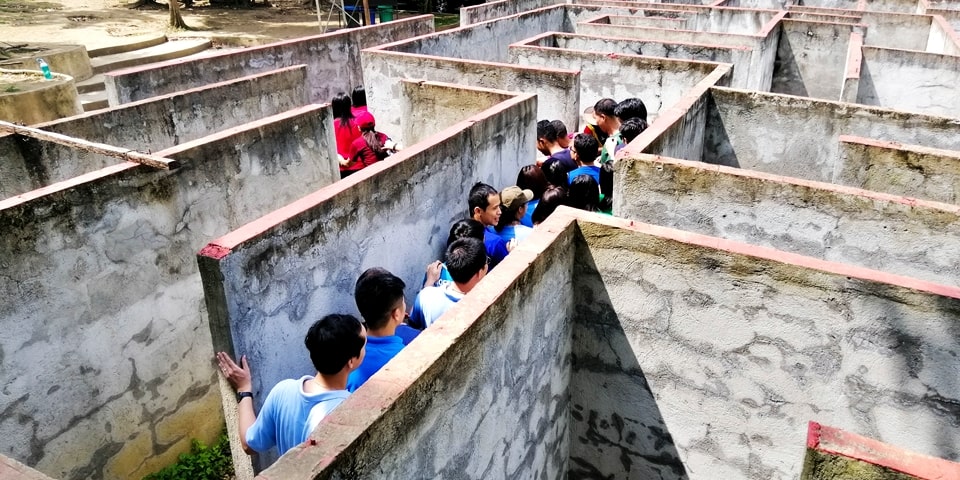 The third activity, Clap and Tap, tested the scholars' collaboration with their teammates. The mechanics of the game was to clap and then tap the shoulder of their team members while counting from one to eight. Yellow Sun finished one second ahead of Green Champs, which led to their first victory. 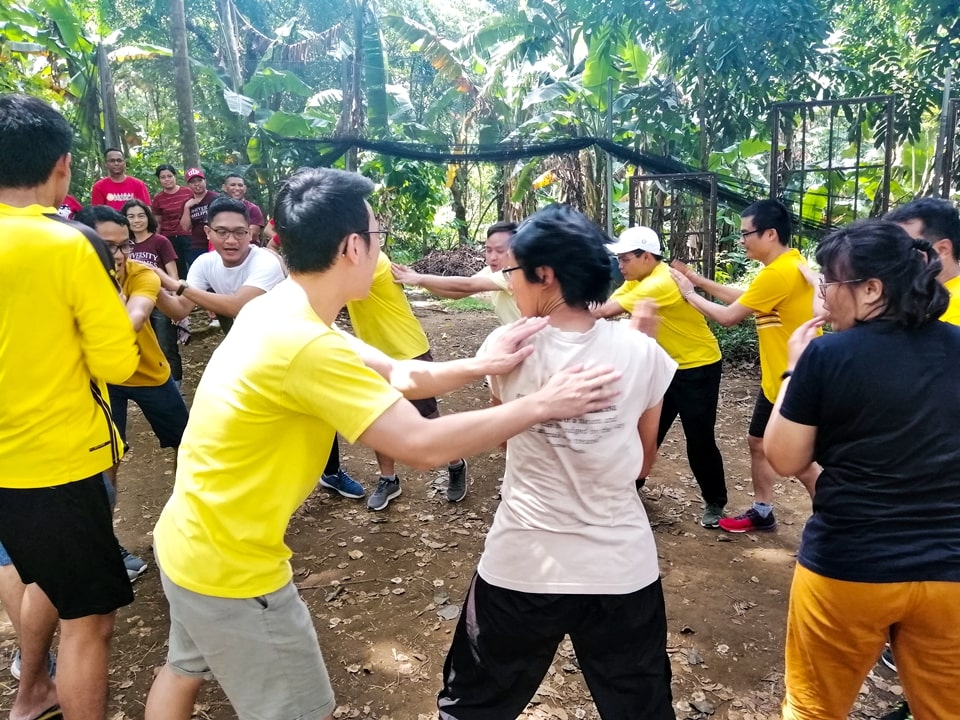 Clap and Tap. Yellow Team won by one second ahead of Green Champs.

In the fourth activity, Hoops Relay, each team was asked to hold hands and transport a hula-hoop from one end to the opposite end without breaking their line. This activity tested their flexibility and for the second time, Love Team won. 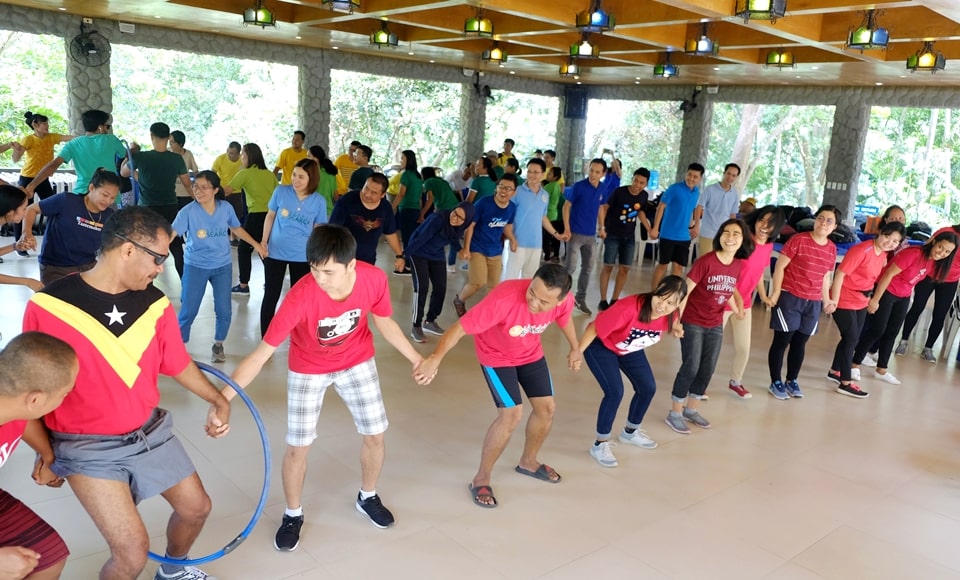 For the fifth activity, Worm Up, the scholars were asked to form a human centipede and then race each other. Yellow Sun claimed their second win with this activity. 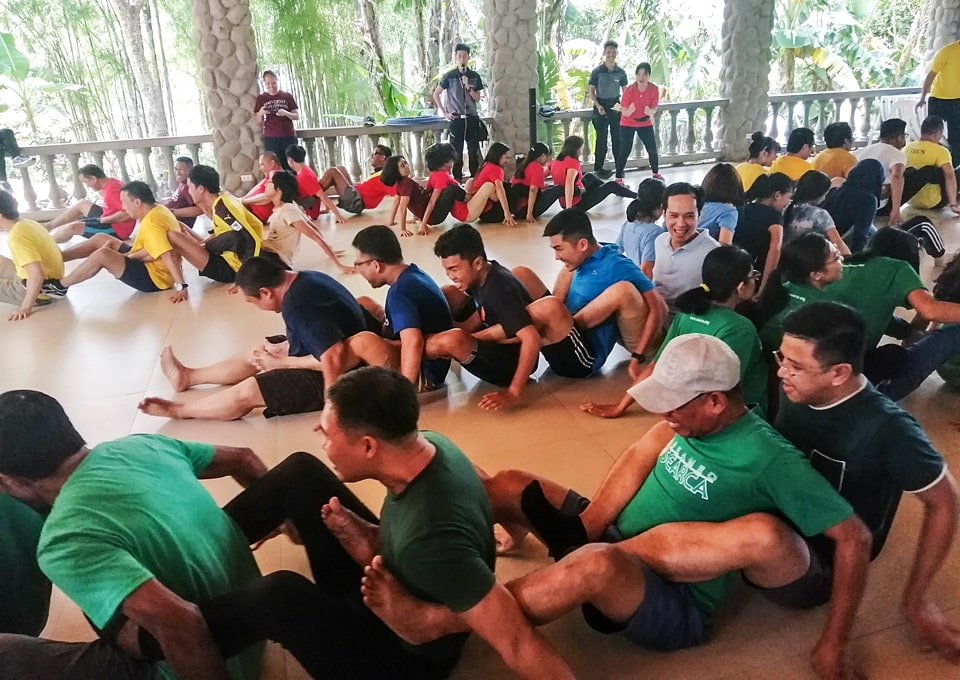 Worm Up. All four teams raced each other with Yellow Sun winning for the second time.

The next part of the team building was dedicated for water activities. The sixth activity was called Submarine, which tested the scholars' flexibility and consistency. The game required them to pass a floater underwater and for the third time, Love Team won. 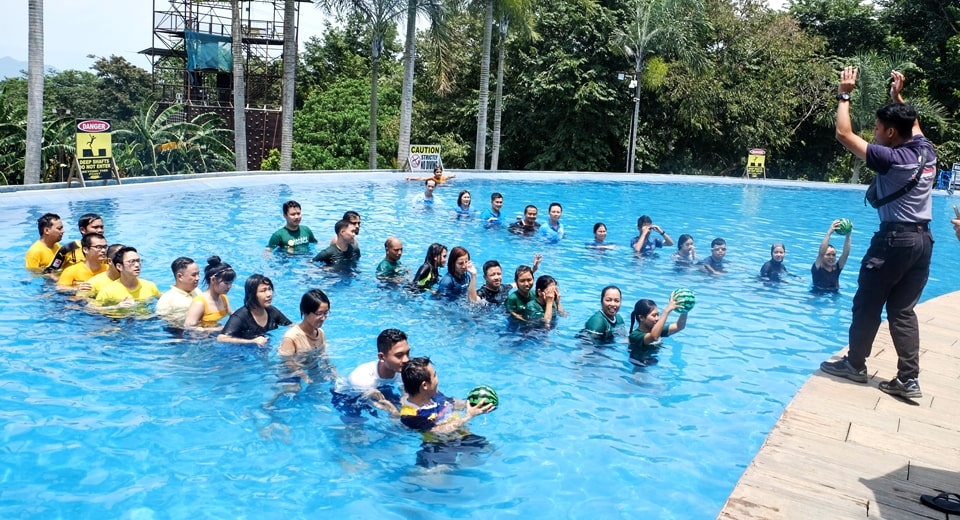 Submarine. The teams preparing to pass the floaters underwater.

The seventh activity called Get Wet and Melt tested the scholars' willingness. The game required them to melt a block of ice using water from their clothes and for the first time, Blue Sky won. 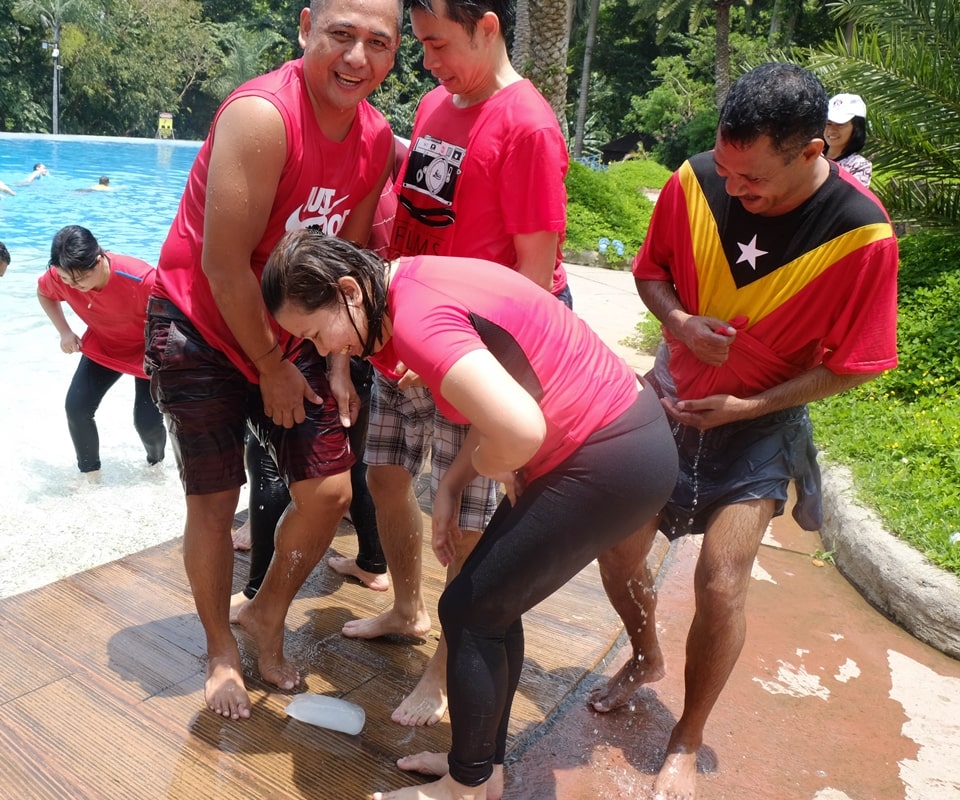 Get Wet and Melt. Maximum effort from Love Team as they tried to melt their block of ice.

The final game, Jellyfish, tested the teams' unity. The four groups were merged with a tag team of Love Team and Green Champs playing against Yellow Sun and Blue Sky. The goal of the game was to secure the floating buoys in the pool without touching it and if possible, steal the other team's buoy. The team with the most number of collected buoys wins. The combined team of Yellow Sun and Blue Sky won this final round. 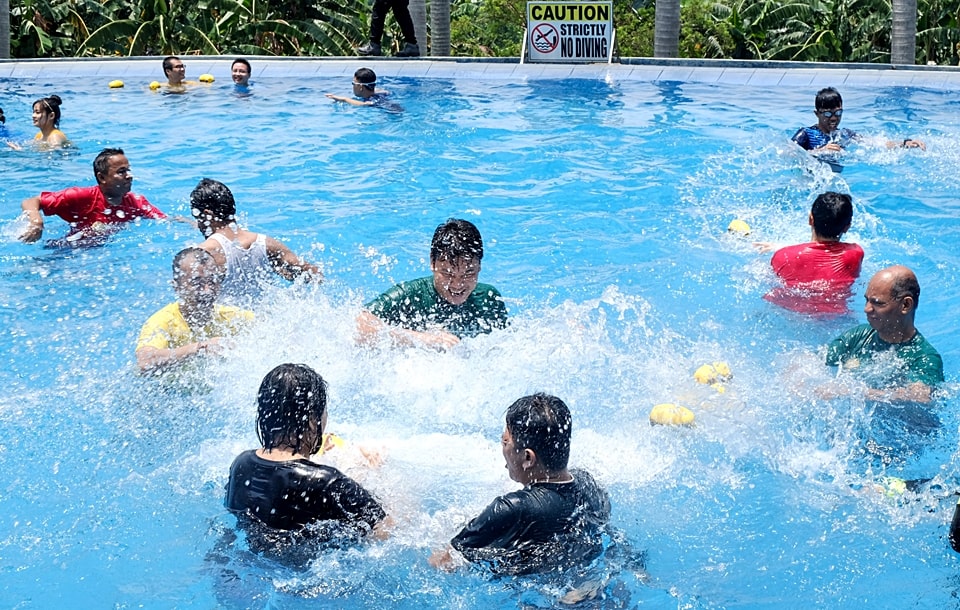 Overall, Love Team emerged as champions. This win was very memorable especially for some of the members as they will be graduating this year and it was their last team building activity. As one of the scholars, Ms. Sandy Ling Choo, said "It's not about building a team, it's about building a family." 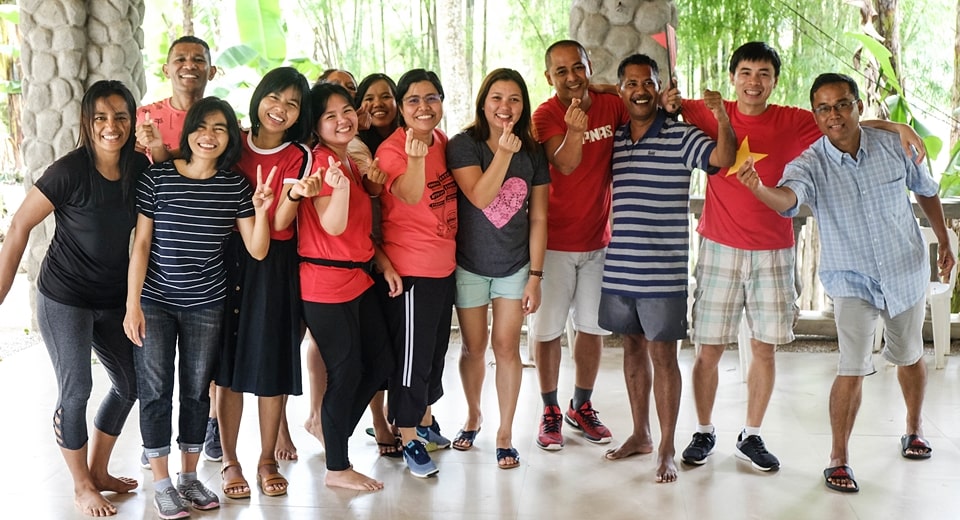 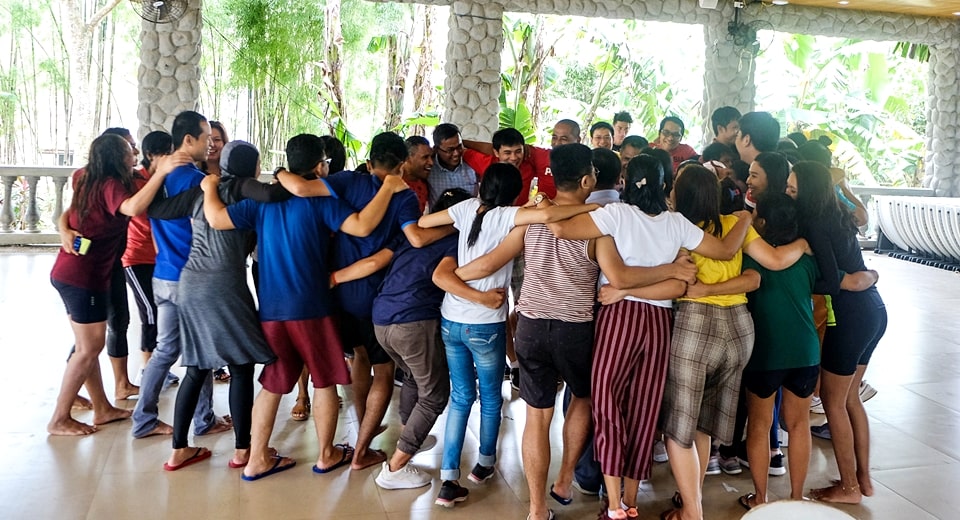 We are a family. SEARCA scholars' group hug before going back to Los Banos.