The Southeast Asian Regional Center for Graduate Study and Research in Agriculture (SEARCA) has awarded a Seed Fund for Research and Development worth US$15,000 to the University of the Philippines Rural High School (UPRHS) for its Youth Program on Agriculture.

SEARCA Director Dr. Glenn B. Gregorio announced the award at the fund-raising event called "Coming Home: Lemuel Cuento in Concert" held on 26 February 2020 at the D.L. Umali Auditorium of UP Los Baños (UPLB). 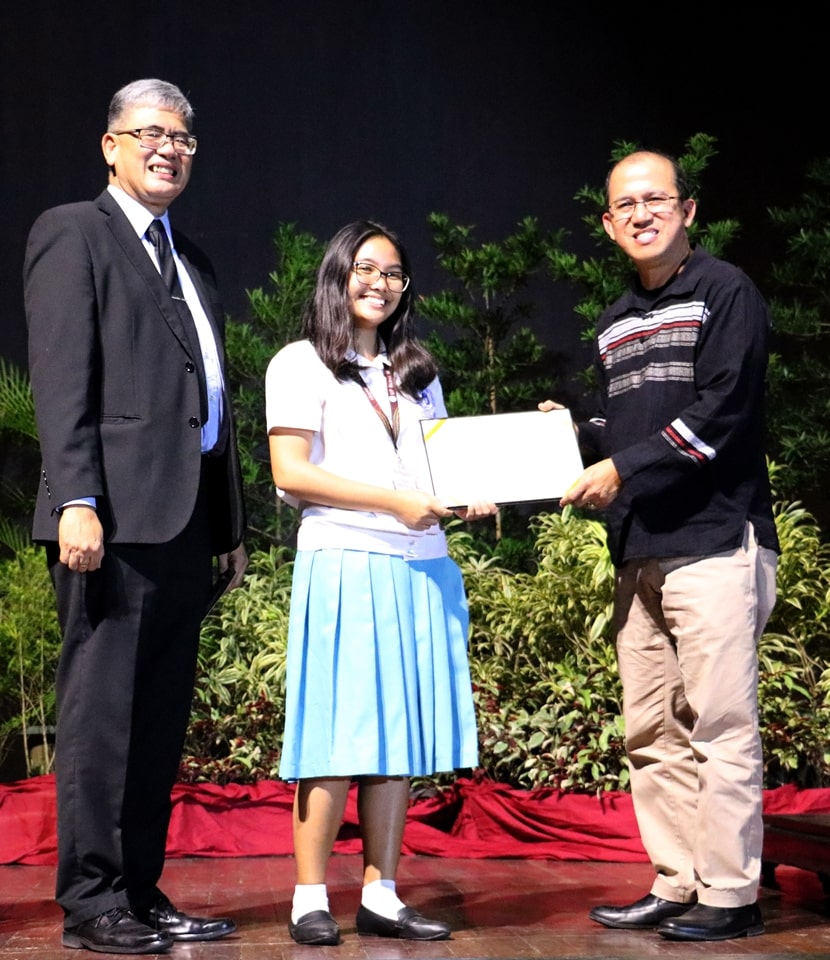 SEARCA Director Dr. Glenn B. Gregorio presents the certificate for the Seed Fund for Research and Development worth US$15,000 that SEARCA awards to the University of the Philippines Rural High School (UPRHS) for its Youth Program on Agriculture as UP Principal Dr. Gregorio Y. Ardales, Jr. looks on.SEARCA was also a sponsor of the two-hour concert, which was also for the benefit of the UPRHS Youth Program on Agriculture. The concert featured internationally renowned tenor Lemuel Cuento, who is an alumnus of UPRHS and accompanied by Jesper Colleen Mercado on the piano. It also featured performances by the UPRHS Glee Club.

Dr. Gregorio said the seed fund is for the proposal that UPRHS submitted to SEARCA.

"The proposal is to engage Grade 11 students, through research internships, and encourage them to pursue careers in agriculture, nutrition, and related fields," Dr. Gregorio explained.

He said SEARCA's support to UPRHS is in line with the Center's upcoming initiative called Young Forces for Agricultural Innovation (#Y4AGRI).

#Y4AGRI aims to engage and empower young people in agricultural innovation—from young children, to high school, college, and young professionals. It intends to use awareness, appreciation, action, and alliance strategies to attract and mobilize the youth in agriculture that SEARCA calls "Young Agrinnovators."

"In #Y4AGRI, SEARCA will work with institutions who can help us with our goal to engage and empower the youth in agriculture. That's one of the reasons why SEARCA supported this concert," Dr. Gregorio explained.

He added that SEARCA is raring to implement its 11th Five-Year Plan beginning in July 2020 with a renewed focus to alleviate the plight of the many stakeholders of the agriculture sector particularly farmers and their families, including the youth.

"SEARCA will also expand and transform its service portfolios and sphere of influence in the ARD landscape to specifically include non-traditional but equally important beneficiaries, such as K-12 schools, beyond higher education institutions that the Center has already been serving," Dr. Gregorio said.

He emphasized that "we are gearing to facilitate all these efforts because SEARCA believes in the power of the youth."

SEARCA also mounted an exhibit at the concert venue that showcased the winners of its recent Photo Content featuring youth agripreneurs in Southeast Asia.