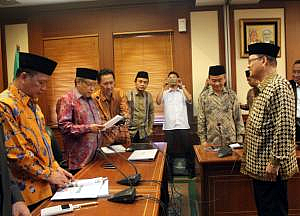 Another SEARCA alumnus has been appointed as a university chief executive in Indonesia. Prof. Dr. M. Maksum Mahfoedz (PhD and MS Agricultural Engineering, 1985-1989, 1982-1985) was officially sworn in as the new Rector of the University of Nahdlatul Ulama (UNU) Indonesia by General Chairman of Nahdlatul Ulama (NU), Prof. Dr. KH Said Aqil Siroj on 10 July 2015. The elected rector Prof. Dr. Maksum said he envisions UNU Indonesia to become an outstanding university and the melting pot for the academic world, Islam, nationality, and struggle. “My attitude is sami'na wa atho'na, and will manage the UNU Indonesia based on the principle of collectivity or unity by effacing the ego position," he furthered.

Prior to his new appointment, Dr. Maksum was a professor at the Faculty of Agricultural Technology at the Universitas Gadjah Mada. He also served NU in various capacities including Chairman of the Central Board for five years. Dr. Maksum finished MS and PhD in Agricultural Engineering from the University of the Philippines Los Baños in 1985 and 1989, respectively.