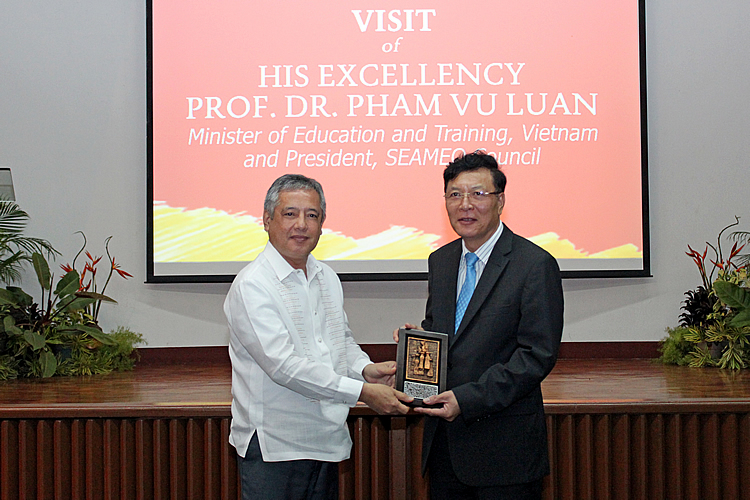 His Excellency Prof. Dr. Pham Vu Luan, Minister of Education and Training of Vietnam and President of the Southeast Asian Ministers of Education Organization (SEAMEO) Council, lauded Southeast Asian Regional Center for Graduate Study and Research in Agriculture (SEARCA) for its contributions to SEAMEO and to research and training in agriculture and forestry in the region during his visit to the Center on 26 January 2015. 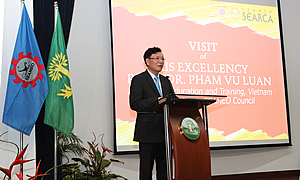 Representatives of the Department of Education (DepEd), Philippines escorted H.E. Pham Vu Luan. DepEd Secretary Armin A. Luistro and the education ministers of the 10 other Southeast Asian countries constitute the SEAMEO Council. 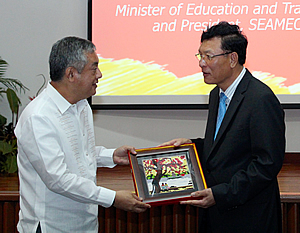 Dr. Gil C. Saguiguit, Jr., SEARCA Director, led the Center in welcoming the SEAMEO Council President and his entourage. Dr. Fernando C. Sanchez, Jr., Chancellor, University of the Philippines Los Baños (UPLB) and Philippine representative to the SEARCA Governing Board, also welcomed them to the university campus where SEARCA is hosted by the Philippine government.

Also at SEARCA to meet with the SEAMEO Council President were Dr. Romeo R. Quizon, Director of the Southeast Asian Regional Centre for Public Health, Hospital Administration, Environmental and Occupational Health (SEAMEO TROPMED-Philippines) based in the University of the Philippines (UP) Manila where he is also Dean of the College of Public Health (CPH), and Dr. Maria Carmen C. Tolabing, Assistant to the Dean for Academic Affairs of UP-CPH.

In a joint meeting attended by the guests as well as SEARCA staff and scholars, H.E. Pham Vu Luan was given a briefing about SEARCA, its accomplishments in FY 2013/2014, and its Tenth Five-Year Plan (FY 2014/2015-2018/2019), as well as the programs and activities of SEAMEO TROPMED-Philippines.

In response, the SEAMEO Council President thanked the two Centers for their warm welcome and for their “very informative presentations” on the programs and activities they implement in the past fiscal year.

He noted the success of SEARCA in its research studies on agriculture and forestry as well as “in training, and having many scholars who are well-known internationally and regionally.”

“I would like to take this opportunity to express our sincere thanks on behalf of the government of Vietnam, the Ministry of Education and Training of Vietnam for your support and assistance in building capacity, and training many Vietnamese scholars in agriculture and forestry sector of Vietnam in the past years,” H.E. Pham Vu Luan said.

“As President of the SEAMEO Council, I’d like to express my thanks and recognition of your contribution in supporting other SEAMEO centers in the region as well as contributing to SEAMEO operations in general,” he added.

H.E. Pham Vu Luan also expressed his appreciation for the efforts of SEAMEO TROPMED-Philippines in providing the public health training program for many experts in the region, which contributes to the improvement of public health in the region.

He disclosed that he and Secretary Luistro had a meeting earlier that day wherein they agreed that the Philippines and Vietnam will prioritize a number of areas for bilateral cooperation. He said they believe such an initiative will set “a bright example to other countries.” He expressed his hope that public health will be among said priority areas. On the other hand, he affirmed that agriculture and the core activities of SEARCA are priority areas.

The SEAMEO Council President’s visits to the SEAMEO centers in the Philippines and other countries in the region are expected to reinforce the strong ties among the members of the SEAMEO family.