You are here: Home   /   News & Updates   /   SEARCA News   /   Philippine Legislators Bat for the Advancement of Genome Editing in the Country

SEARCA teamed up with the USDA Foreign Agricultural Service, United States Embassy Manila, and the International Service for the Acquisition of Agri-biotech Applications (ISAAA) for a virtual webinar entitled Better Crops with Genome Editing: Applications, Potential, and Policies held on 5 August 2021.

The knowledge-sharing and learning activity, organized for the members of the Philippine House of Representatives, aims to engage Members of Congress to enrich their understanding of biotech crops and biosafety regulations, particularly on genome editing technologies.

Dr. Wayne Parrot, Professor from The University of Georgia, Athens and Dr. Gabriel O. Romero, Executive Director of the Philippine Seed Industry Association, were invited to provide both the global and local perspectives on genome editing as well as the regulations and challenges in the field. They addressed questions and concerns from participants ranging from health and environmental safety of genome-edited crops, regulatory policies, and its potential impact on other crop varieties. 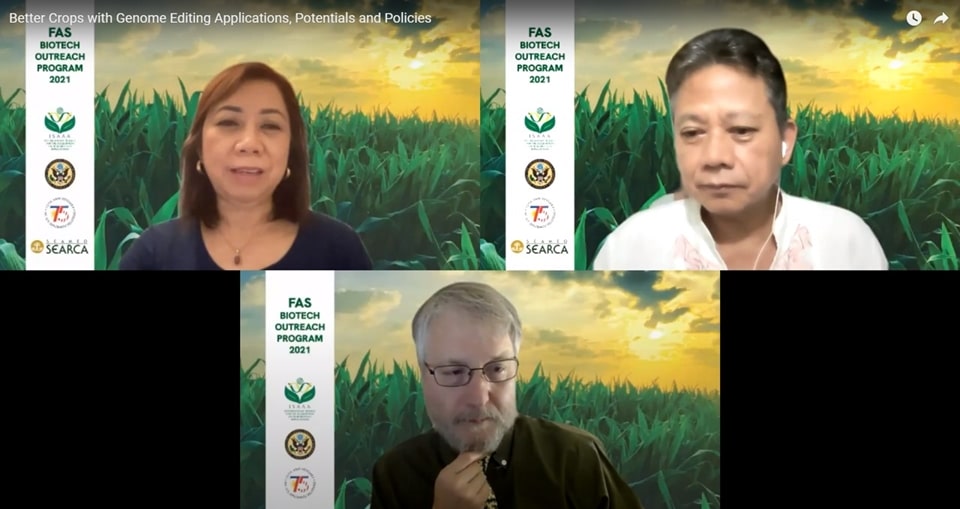 The webinar also tackled how to develop an enabling environment for harnessing the potential contribution of new breeding technologies in increasing productivity as well as in achieving the sustainable development of the country’s agriculture sector. Hon. Elisa T. Kho, Chair of the Committee on Rural Development, recognized the recent approval of Golden Rice for commercial production and the approval of Bt eggplant for food, feed, or for processing (FFP). “I call on our international and national partners to support government and private sector efforts in ensuring that small farmers, consumers, and special assisted groups like malnourished children and their families will reap the benefits of Bt eggplant and Golden Rice,” she stated. In better public health situations, she called on foreign partners who spearheaded this very important webinar, to visit farmers and farm communities in the rural areas as part of the campaign on public awareness on the benefits of biotechnology particularly on crops.

Hon. Kho is also actively involved in pushing the legislative agenda on biotech in Congress. She informed the group that the Committee on Science and Technology will initially deliberate House Bill 8152 (An Act Establishing a National Framework for the Promotion Animal Biotechnology), which is a counterpart bill of plant biotechnology, on August 16, 2021. Inspired on the updates of the distinguished resource persons in the webinar, she is working with technical experts to craft a bill on Genome Editing of agricultural crops based on the Philippine setting.

Hon. Wilfredo S. Caminero, Chair of the Special Committee on Food Security, who spoke on the biosafety regulations in the country, also shared his views. “As a long-term solution towards zero hunger and self-sufficiency and to address food insecurity, we must all work hand in hand and welcome such innovations and promote investment in similar research and development,” he stated. He also shared his hands on experience as a farmer, with the great hope of adopting biotechnology in his farm in Cebu.

He also noted that while the approval of Golden Rice and Bt eggplant should be celebrated, it took time before the biotech crops were issued permits. “If there are suggestions or plans on how to expedite the approval of genetically modified crops and crop biotech permits, feel free to inform us in Congress so we may help you through legislation,” Hon. Caminero added.

In his closing message, Hon. Erico Aristotle C. Aumentado, Chair of the Committee on Science and Technology, reiterated the role of legislators in crafting relevant policies that would advance the economic and agriculture sectors of the country. He continued, “As policymakers, we are responsible for utilizing scientific research and evidence currently available to develop and amend policies with the end goal of improving the lives of farmers and farming families and beyond.” He will convey to the organizers of the webinar the measures referred to his committee, of which his committee leadership is prioritizing since the start of the 18th Congress.

The webinar was attended by around 50 Congress staff and officials. Other notable attendees from Congress included Deputy Speaker, Hon. Deogracias Victor B. Savellano, and Hon. Faustino A. Dy V from the sixth district of Isabela. 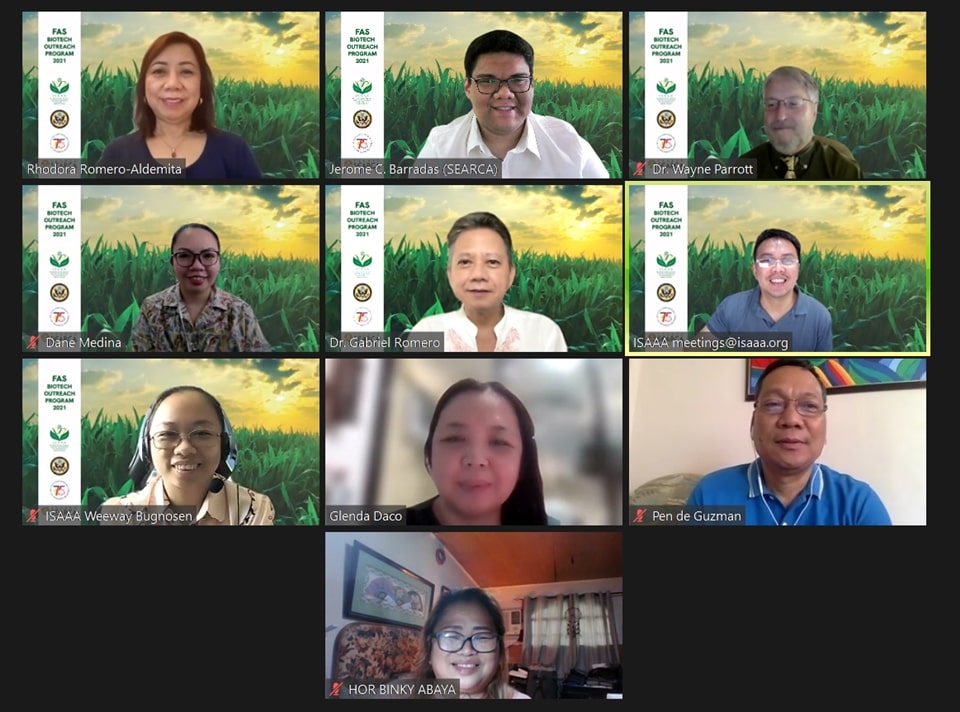 The resource speakers together with the organizing team from ISAAA, SEARCA, and Congress.