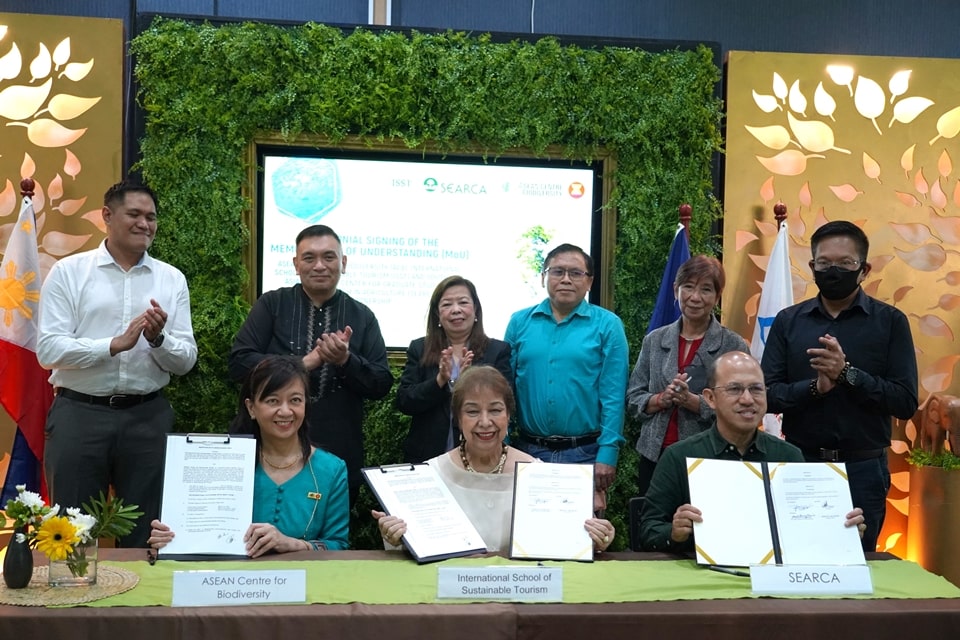 The International School of Sustainable Tourism (ISST) and the Southeast Asian Regional Center for Graduate Study and Research in Agriculture (SEARCA) had a ceremonial signing of its Letter of Agreement (LOA) on the implementation of the International Ecotourism Travel Mart (IETM 2023) on 12 October 2022 at the ASEAN Centre for Biodiversity (ACB). The event will be held from 29 March to 2 April 2023 at the International Institute of Rural Reconstruction (IIRR) James Yen Center in Silang, Cavite. ACB is also a partner of ISST in the implementation of the event.

ISST is a private non-stock and non-profit corporation established in the Philippines to promote, develop, and operate sustainable tourism in the country and in other ASEAN countries. Its mission is to preserve ecological resources for sustainable tourism and development.

SEARCA and ISST share the common objective of promoting ecotourism to encourage economic productivity and income. The evolving context of the emergence of this type of tourism in a form of a green travel mart and selling fair resonates with the Center’s 7 priority areas in particular, Enhanced Agricultural and Rural Development or ARD towards Climate Resilience and Agri-Business Models for Increased Productivity and Income priority areas.

The first-ever green travel mart and selling fair in the world is organized by the Asian Ecotourism Network (AEN), a regional initiative of the Global Ecotourism Network (GEN) that generates knowledge transfer, marketing, consulting, and business development for AEN ecotourism stakeholders.

The IETM 2023 is an annual event designed to bring together delegates and exhibitors to showcase products and services that have a strong ecotourism component, green technology, and sustainable green practices.