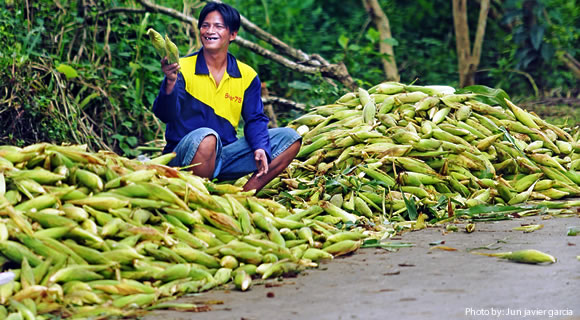 Next to rice, corn is the most important crop in the Philippines. About 14 million Filipinos prefer white corn as their main staple, while yellow corn accounts for about 50 percent of livestock mixed feeds. According to the Department of Agriculture, some 600,000 farm households depend on corn as a major source of livelihood. Corn is also processed into high value products, such as cornstarch, corn syrup, corn oil, gluten, and snack foods.

The Philippine Crop Insurance Corporation said, that from 1982–2012, pests, diseases, droughts, floods, and typhoons had wreaked havoc on crops resulting to cumulative losses of about PHP 7.09 billion for corn farmers. Crop insurance—a risk management tool—is key to farmers’ financial stability, enabling them to continue production despite severe weather and other challenges that impact their business.

In view of this, the Southeast Asian Regional Center for Graduate Study and Research in Agriculture (SEARCA) implemented a study titled “Improving the Corn Insurance Program to Enhance Resilience to Climate Change.” The study analyzed how good agricultural practices (GAP) adoption among corn farmers could be implemented to complement the enhancement of the agricultural insurance system in the Philippines. More specifically, it identified existing and matured GAP technologies related to pest and disease resilience in corn production. It also determined the extent of awareness of farmers about these technologies and analyzed uptake patterns and identified the psychological, socioeconomic and demographic determinants of GAP adoption. Furthermore, it assessed the perception and level of awareness on crop insurance system mechanisms among corn farmers and identified appropriate policy recommendations and intervention measures to improve adoption of GAP and the formulation and effectiveness of agricultural insurance program.

The project was led by Dr. Jose M. Yorobe, Jr., Associate Professor at the Department of Agricultural Economics, College of Economics and Management, University of the Philippines Los Baños (CEM-UPLB). The study sites are the top corn-producing provinces in the country, including Pangasinan, Isabela, and Bukidnon. The study focused on the towns of Alcala and Bayambang in Pangasinan, Cauayan City and Ilagan in Isabela, and Malaybalay City and Don Carlos in Bukidnon. There were 426 corn farmers interviewed—only half of which were insured.

However, with the promotion of good agricultural practices (GAP) the possibility of farmers availing insurance decreases. GAP becomes a substitute for insurance as a risk management tool. Most farmers acknowledge the use of recommended technologies as a scheme to cope with pest, disease damage, and natural calamities.

The presence of moral hazard is also evident considering that corn insurance showed a negative influence on the extent of GAP adoption. The presence of information asymmetry—a condition in which at least some relevant information is known to some but not to all parties involved—causes insurance premiums to increase.Currently farmers are not that affected due to the subsidy given by the government. The subsidy, however, is not sustainable due to the high variability of fund allocation for this purpose. The insurance market is supply driven and highly demand inelastic. To increase the demand for insurance, premium rates need to be greatly reduced.

Policies designed to reduce the premium subsidy of the government and provide resiliency to climate change can strengthen the extent of GAP adoption. With this, farmers tend to be less risk-averse. The corn crop insurance provides a temporary mechanism for farmers to be resilient under erratic environmental conditions while GAP adoption is improved. (Jose M. Yorobe, Jr. and Pilipinas M. Luis)