Final results of Meta-Analysis of SEARCA’s Food Security Initiatives and SEARCA Research Thrusts and Programs through the years: The Way towards Food Security presented 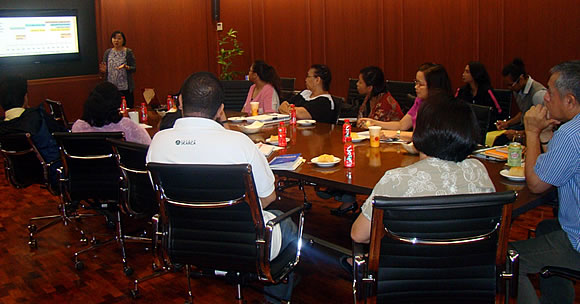 The Meta-Analysis research examined all the food security-related projects and activities conducted by SEARCA from 2000 to 2012. Dr. Depositario analyzed trends and patterns exhibited in the initiatives, drew insights and lessons from the research results and outputs, as well as identified research gaps in capacity development and knowledge management activities of the Center. Dr. Depositario recommended possible future directions in food security research and other initiatives which SEARCA and its partner institutions can adopt to make a substantive contribution to food security in the Southeast Asian region.

A second paper on “SEARCA Research Thrusts and Programs through the years: The Way towards Food Security” was likewise presented by Dr. Depositario, which described the evolution and paradigm shift of SEARCA’s research thrusts and programs from 1969 to 2012, with emphasis on how food security was mainstreamed in SEARCA’s research initiatives through the years -- from being discipline-based, to multidisciplinary and interdisciplinary, and, more recently, shifting towards transdisciplinary research.

SEARCA Director, Dr. Gil Saguiguit, Jr., provided significant insights, during the discussion, on the usefulness of the two studies to the Center’s priority thrusts and programs under its upcoming 10th Five-Year Plan. Dr. Saguiguit stressed that the studies’ recommendations can be used to pin down specific topics that SEARCA needs to concentrate on in the next five years, and in so doing, fill the gaps in the food security continuum that Dr. Depositario presented in the Meta Analysis research.