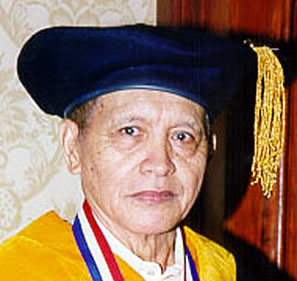 MANILA, Philippines – President Benigno S. Aquino III conferred the Order of National Scientist on Dr. Ramon C. Barba, recipient of the 2011 Dioscoro L. Umali Achievement Award in Agricultural Development, and three other Filipino scientists who have done trailblazing work in various fields of science and technology, making significant contributions to the country’s development and to humankind as a whole. The ceremony was held on 12 August 2014 in Malacañang.

Dr. Barba was cited for his distinguished achievements in the field of plant physiology, particularly his mango flower induction technology that resulted in year-round availability of mango fruits and his micropropagation of important crop species.

It is for the same innovation that revolutionized mango production and his pioneering work on micropropagation of banana, sugarcane, calamansi, and other crops that Dr. Barba won the Umali Award conferred by the Southeast Asian Regional Center for Graduate Study and Research in Agriculture (SEARCA), Dioscoro L. Umali Foundation, Inc. (DLUF), and the National Academy of Science and Technology (NAST) of the Philippines.

Named in honor of the late National Scientist Dioscoro L. Umali, the first Director of SEARCA and a renowned development practitioner, the award recognizes exemplary Southeast Asians whose exceptional work have provided significant positive impact in agricultural development and the quality of life in rural communities in the region. Dr. Barba is the first Filipino to receive the award and the third of four recipients in Southeast Asia.

Dr. Barba, along with the three other distinguished recipients of the Umali Award, will serve as panel discussant on the topic “In Quest of a Food Secure ASEAN” during the 2nd International Conference on Agricultural and Rural Development in Southeast Asia or ARD2014. Themed “Strengthening Resilience, Equity and Integration in ASEAN Food and Agriculture Systems,” ARD2014 will take place on 12-13 November 2014 at Makati Shangri-La, Manila, Philippines.