Meeting the Challenges of Food Security with Biotechnology

Former anti-GMO activist and renowned British author on climate change Mark Lynas asserted the importance of biotechnology in addressing the challenges of food security during his SEARCA Special Seminar titled “Meeting the Challenges of Food Security with Biotechnology” held at SEARCA on 23 August 2013. The seminar was attended by more than a hundred scientists, researchers, faculty, and students from the University of the Philippines Los Baños (UPLB) and other research institutions in Los Baños, Laguna.

According to Lynas, there is a need to grow more food from the same area of land in order to protect habitats and address the increasing food demand of a growing population. Agriculture, he said, is the number one cause of habitat loss, which is a primary reason for biodiversity loss. Lynas maintained that through modern biotechnology, improved crops can be developed that can help address agriculture-related environmental problems such as depletion of freshwater resources and nitrogen wastes.

Citing Food and Agriculture Organization (FAO) statistics, he said that the growth in yields of major staple food crops is no longer keeping pace with the growth of human population. He added that there is a need to increase world food production by at least 100 percent by 2050 in order to keep up with the population growth. He explained that to double the cropland and food supply, key areas of biodiversity will have to be destroyed. 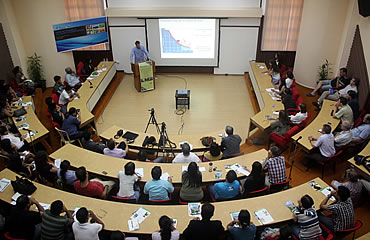 Lynas also pointed out that with climate change, “we don’t have the option to simply continue doing agriculture, simply doing food production as we always have done before… The world’s temperatures are rising in such a rate that we now potentially have areas in the world which will no longer be able to produce crops simply because they’re going to be too hot. So doing nothing, making the same, and only using the old varieties is not an option.”

He also emphasized the importance of scientific credibility when it comes to GMOs, explaining that peer-reviewed materials or journals should be valued more than mere claims from anti-GMO groups. He cited how recognized scientific organizations worldwide have concluded that products of modern biotechnology are as safe as their counterparts from conventional breeding.

Lynas shared that his viewpoint on GM crops changed when he studied biotechnology as part of his research on climate change. He expressed this change of mindset during his lecture at the Oxford Farming Conference in January 2013. “I apologize for having spent several years ripping up GM crops. I am also sorry that I helped to start the anti-GM movement back in the mid-1990s, and that I thereby assisted in demonizing an important technological option which can be used to benefit the environment,” he said in the Oxford lecture.

Lynas is also a Visiting Research Associate at Oxford University’s School of Geography and the Environment in the United Kingdom. He has authored several bestselling books that tackle global issues including climate change and biotechnology. His book, Six Degrees: Our Future on a Hotter Planet was also featured on the National Geographic Channel.

In the Philippines, several public sector biotech crops with improved and potentially beneficial traits are nearing commercialization. The fruit and shoot borer-resistant Bt eggplant or Bt ‘talong’ of UPLB has been projected by studies to have potentially significant socioeconomic and environmental benefits; it has also finished its multi-location field trials in 2012. The vitamin A-enriched rice of the Department of Agriculture’s Philippine Rice Research Institute and the International Rice Research Institute is another local biotech crop in the pipeline that targets vitamin A deficiency.

For more information on the seminar and biotechnology in the Philippines, visit SEARCA Biotechnology Information Center’s website at www.bic.searca.org or send an e-mail to .